At first, did you get the inspiration from the sight of materials, maybe accumulated, or from the line of thought?

Since Furniture Poetry in 1999 I have been making replacement animation using multiple, similar-shaped, found objects. I wanted to animate plastic junk for a long time. Ten years ago I proposed it to a Chinese institution who had contacted me to shoot a film with their students but they didn’t like the idea. Then in 2015 I made The Five Minute Museum which was an animated romp through an imaginary European museum – an eccentric history of man-made objects from the stone age to the present day. I decided to end the film with a sequence of animated plastic junk. It turned out that didn’t satisfy my hunger but only encouraged it. What inspires a new film? Usually the film that was made before.

How much are you interested in the topic of environmentalism? Do you have further projects on this issue? Advice or commitment to share?

Much has been said on this topic by much more informed people than myself. However I would like to point out one thing: there are a few young people who are very active campaigners for reducing plastic waste. But when I was collecting junk plastic on the streets of London the best place to find it was around schools. Everyone needs to change their behaviour, including the young. But as my film tries to reveal this is a beautiful material with many uses. It is also cheap and requires few resources to make. I grew up in the great age of plastic in which most of the toys that we loved were made of plastic. It’s not going to be easy to change. I have made a shorter campaigning version of the film and we are planning to make a new film using a similar idea, for very young children.

How would you explain your technique? How do you make the real items “move”, as if they were animated in real life?
The first time I made a stop motion film of replacement of similar objects was as a student in the mid-seventies but after Furniture Poetry it became a well-known technique. It’s very easy to make and therefore often imitated, and it’s seductive so it’s used a lot in commercials. When I was younger I was experimenting with a lot of techniques but this one has surprised me. It’s provided a way of showing the world that is unique to the mechanics of the film camera. It doesn’t borrow from other art forms like much of cinema. It’s a new language, a sub-division of cinema and animation that has inspired me in many different directions. In this film there is a mixture of this technique with more conventional animation of objects moving – the plastic characters which were animated by Christophe Peladan. 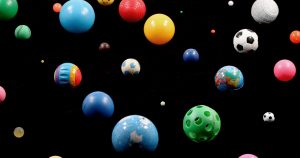 How did you work on the story line?
The different plastic objects inspired different sequences. There are several mini-stories in the film, which is similar to the structure of The Five Minute Museum. The plastic characters who accumulate throughout the film run parallel to the other mini-narratives. All the narratives are of accumulation and the general movement of the film is towards accumulation, excess and over-consumption. All this is underscored by a great music track by Andy Cowton who I have worked with on nearly twenty films.

What do you think the future holds for short films?
Nothing. But if you asked me the same when I began forty years ago I would have answered the same. And I am right in so far as there is no future for short film in the UK. Luckily festivals like this one and the continual interest in short films in some other countries, France in particular, continues to prove me wrong.

If we were to go back into lockdown, what cultural delights would you recommend to alleviate our boredom?
For me it’s big novels, ones that perhaps might be better shorter but now we have the time for: Simone de Beauvoir’s The Mandarins, Javier Marias’s Thus Bad Begins and Rebecca West’s Black Lamb Grey Falcon to name three. And in graphic work Guido Crepax’s complete works which are coming out in beautiful volumes, almost too heavy to carry. There are not enough movies unfortunately and I hate TV series as the structures and devices that keep them going are so tiresomely obvious, but luckily the lockdown doesn’t affect my work so there’s plenty of animation to do.

Dates
29 JAN. > 6 FEB. 2021
Networks
Festival Newsletter
Recent posts
Blog
Café court – Julie Caty
Nightcap with Malabar
All partners
Clermont ISFF | Breakfast with Orgiastic Hyper-Plastic | Clermont ISFF
class="post-template-default single single-post postid-36909 single-format-standard samba_theme samba_left_nav samba_left_align samba_responsive cookies-not-set"
We use cookies to ensure the best experience on our website. If you continue to use this site, we will assume that you are satisfied.OkCookie Policy